STEM to Stern Program Introduces Youth to the Sport of Rowing 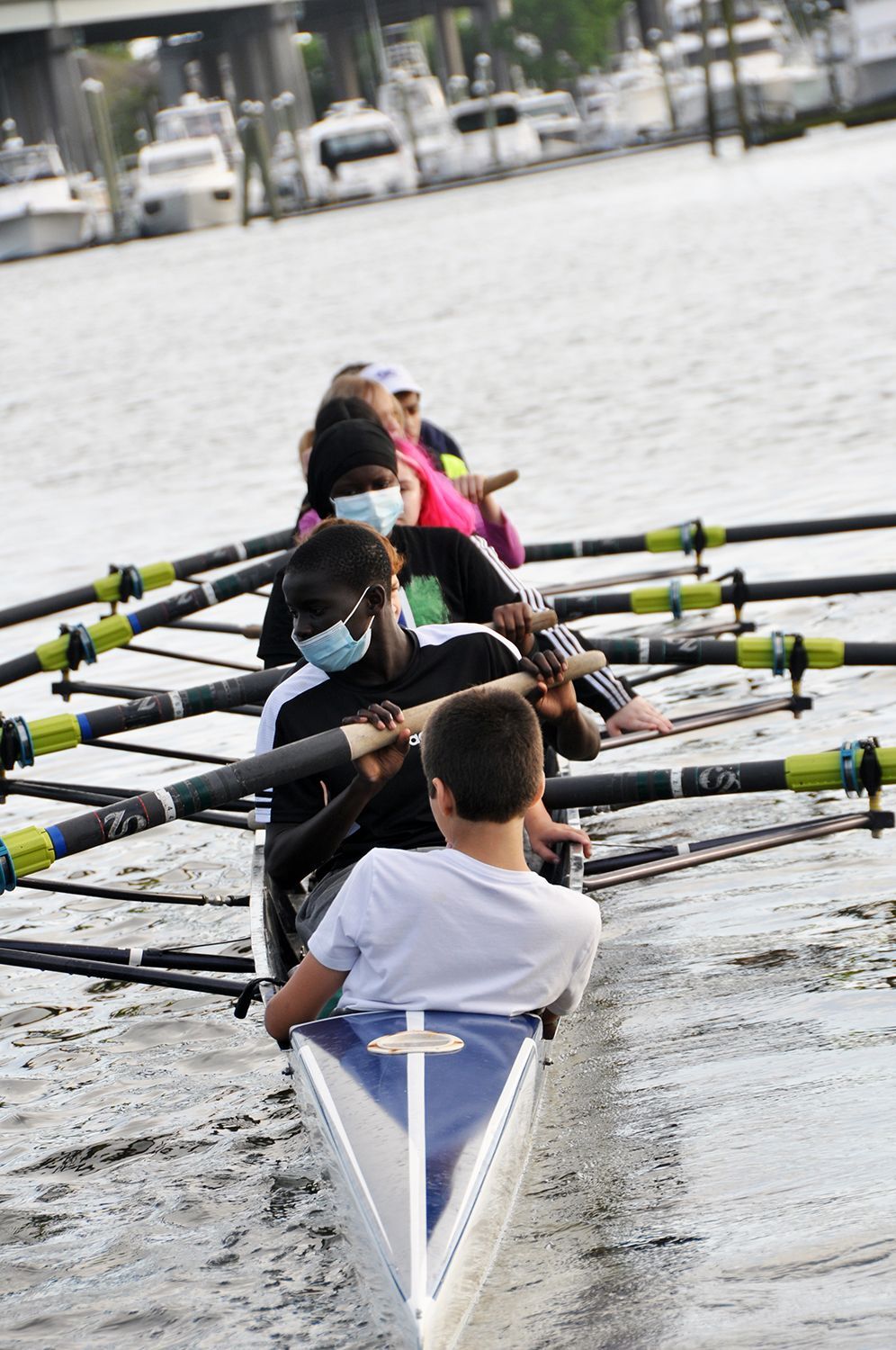 A dozen middle school students have been learning to synchronize their movements in the Cos Cob Harbor, pulling oars as long as they are tall.

The physical exercise has a brain-power component, too: The students pair their rowing skills with components in the STEM field, working on science fair projects along with student mentors from Greenwich High School.

Greenwich’s STEM to Stern program, which began this year, is a passion project involving numerous stakeholders. The local program is part of a national program that partners with USRowing and is designed to make the the competitive sport more diverse.

The group pushes off from Greenwich Water Club’s dock two times per week. They began training in March and finished their season in late May. After that — they can row again for fun or set their sights on Greenwich High School’s competitive crew team.

“It gave me a great opportunity to be with my friends and also build some teamwork and collaboration. And it’s helped me become a better person,” seventh-grader Taylor Tekada said.

Jen Bresler, an avid rower and Greenwich Public Schools instructional coach, said that she and Mike Wieneke, Greenwich Water Club’s director of programs and member services, have wanted to expand the club’s middle school program to be more representative of the town’s three middle schools.

Wieneke discovered the national STEM to Stern program, and Bresler proposed partnering with the Boys & Girls Club of Greenwich.

Friends of Greenwich Crew, a nonprofit that supports the high school team, donated the funds for Boys & Girls Club kids to row for free. Greenwich Water Club’s owner Rick Kral welcomed the program and contributed toward the costs.

It’s been a successful partnership. One group won an award for a project where they tested a series of hypotheses about keeping an egg intact during a 6-foot drop — including using clay to surround the egg.

Another group, inspired by the sport, powered a flashlight with a rowing machine.

Haque, who competed at the Connecticut statewide science fair in eighth grade, said she always planned to help middle school students submit projects to the Greenwich STEM Fair. Bresler asked her if she would like to integrate her plans into STEM to Stern, and Haque said she was delighted to take part.

This school year, she is enrolled in science teacher Andrew Bramante’s class at Greenwich High that prepares students to compete in science fairs.

“Drawing on my personal experiences from eighth grade and also what I’ve learned from Mr. Bramante about how to teach science research, I developed a six-week program for the kids to go from an idea to a fully formed project,” Haque said.

Her goal was to help younger students, Haque said, because she didn’t have a guided program when she created her middle school science project.

“We ask a lot of questions and try to challenge them about where the project was going,” Stempien said.

Camryn Ferrara, athletic coordinator at the Boys & Girls Club of Greenwich, said he enjoys hearing the students expand their conversation with STEM lingo and rowing terminology as they hop on the bus.

“It’s good to see them actually learning and bringing great knowledge back,” he said.

The middle schoolers were tasked recently with teaching Haque and Stempien how to row, with lots of smiles and laughter in the boats.

Ebrima Touray, who recently moved from Gambia, said he joined the program alongside his sister because he was excited to get in the water and learn a new sport. His afternoons would otherwise have been spent kicking a soccer ball, completing homework or playing video games, he said.

“I like the movement and the energy rowing gives me,” he said.

Gabe De Carvalho said he signed up for STEM to Stern when he learned the program was free.

“I learned how to work as a team, and I learned a lot of friendship values as well as teammate values,” he said.

Oliver Probst, who coaches the STEM to Stern students and Greenwich Crew, said putting $500 oars and $10,000 boats into the hands of preteens was a stretch but said it worked out surprisingly well.

“These kids are awesome,” he said. “We usually get a lot of kids that sign up because their parents want them to get into a good college, but these kids just want to have fun.”

If STEM to Stern participants want to continue to the high school level, Friends of Greenwich Crew said it has other scholarship opportunities.