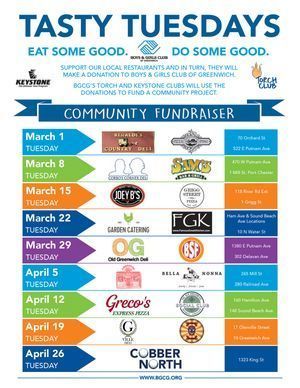 On nine Tuesdays throughout March and April, 17 local restaurants are supporting Boys & Girls Club of Greenwich in an initiative called, “Tasty Tuesdays.” Members of the Greenwich community are asked to support one of the local restaurants, who then in turn will make a donation to the Club. Run by BGCG’s Keystone and Torch Clubs, the fundraiser will bring in donations that will then be used to support our local youth. Many thanks to the local community and restaurants who are supporting the Club!